Peter Cincotti Musical How Deep Is The Ocean? on PlayBill.com 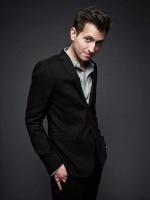 Peter Cincotti Musical How Deep Is The Ocean? to Feature Michelle Federer, Eric Leviton and More

Michelle Federer, Sandy Rosenberg, Aaron Ramey and Eric Leviton will be part of the New York Theatre Festival world premiere of How Deep Is The Ocean?


Jazz musician Peter Cincotti ("Metropolis") authored music and lyrics to the musical that has a book by his sister, playwright Pia Cincotti.

Jeremy Dobrish (Rated P, Date of a Lifetime) and Gina Rattan (resident director, Billy Elliott) will direct the July 12-21 run at the Theater at St. Clement's.

Here's how the musical is billed:

"It's summer and the temperature's rising when suddenly every beach on the Jersey Shore is threatened with closure: The water is too polluted for swimming! That is until Rob – a small town pool technician – stumbles upon an opportunity that will change his life and save the sea. But when a local handy man's lust for power and revenge threatens Rob's world, the two rivals are thrust into battle to restore the ocean and win the heart of a woman they both love. How Deep Is The Ocean? is a musical comedy about love, lust, and chlorine."